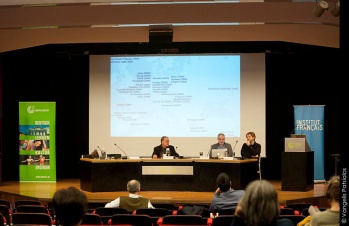 At the end of Novermber, from 27th to 29th, despite a spinal problem that bothers me for months now, I participated at the international symposium “Le triple voyage – die dreifache Reise – Το τριπλό ταξίδι,“ which was organized by the French Institute and the Goethe Institut in Athens.

I had the honor to serve as a member of the scientific committee, as well as a speaker, along with other five distinguished colleagues,  Thomas Schaeffer (director of the Darmstadt Institute for New Music), Theodore Antoniou (President of the Greek Composers Union), Makis Solomos (professor of Musicology at Université Paris 8), Giorgos Zervos (assistant professor of musicology at the Kapodistrian University of Athens), and Panos Vlagopoulos (assistant professor of music theory at the Ionian University, Corfu, Greece).

Exiles and migrations gave the opportunity to Greek composers such as Iannis Xenakis and Georges Aperghis to make the new music from Greece known abroad. At the same time, a new relationship with German and French “comrades” have been forged. The symposium thematized the music exchanges among Greece, Germany and France from 1945 to present.

Lots of stimulating conversations and exchanges by day and lots of drinks by night. The hospitality of the French Institute (www.ifa.gr) and the Goethe Institut (http://www.goethe.de/ins/gr/ath/elindex.htm) has been exemplary.